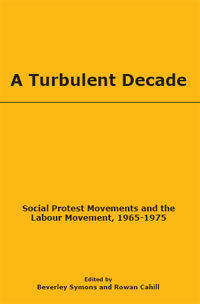 A Turbulent Decade (Edited by Beverley Symons and Rowan Cahill)

A Turbulent Decade is now out of print. However it has been digitised by the University of Wollongong and is available for free download here.

During the turbulent decade 1965-1975, a cultural revolution took place in Australia. The future was seeded with movements and ideas that changed Australian society and culture, and enlarged the space for democratic action. In A Turbulent Decade: Social Protest Movements and the Labour Movement, 1965-1975, edited by Beverley Symons and Rowan Cahill, veterans of the period recall and reflect upon the decade, often candidly, at times vulnerably so. The focus is Sydney and New South Wales, and a great deal that is new is added to the public record. The book covers the Anti-Vietnam War and Anti-Conscription Movements, the Student, New Left and Counter Culture Movements, Women’s Liberation, Gay and Lesbian Rights, Aboriginal Land Rights and Civil Rights, the Anti-Apartheid Movement, the Trade Union Movement, and the Australian Labor Party.

Save this product for later