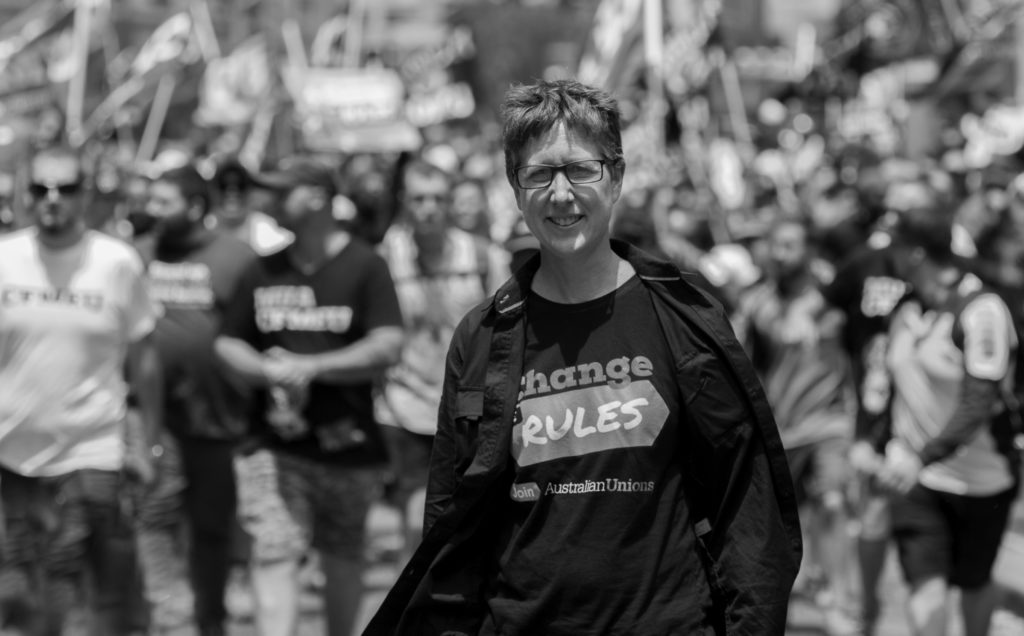 It is really wonderful to be here at the Carriage Works – what was known as Eveleigh railway workshops. Now it’s the site of hipster markets and events, but it was once the centre of trade unionism in this city.

Like many Sydney-siders I share some of this history. My father started his apprenticeship as a cabinetmaker here when he was 15 in the late 1950s. Cabinetmakers were of course important to the building of carriages.

The NSW Railways, or as it was known “working on the railways”, provided training, skills and good steady jobs for generations, not just here in Sydney, but across NSW, as did the public sector here and across the country. The government took on young working-class people and set them on this path which allowed generations to pass on better living standards, better education for their kids.

I remember visiting this site when I was a kid as the Railways put on a day when workers could bring their kids to work. Thousands of children crawled over trains and heavy equipment, inspected engines and the machines that made the machines.

My dad went on to get more skills and moved into a white-collar job helping with the logistics of getting grain from farms to ports. Not bad for someone who didn’t finish high school.

Then came the 1980s, when neo-liberalism in the form of Nick Greiner came on the scene and the downsizing of the public sector started. “Spill and fills” were all the rage and it was so stressful in our house as Dad, who had never done a job interview before, had to reapply for his own job many times over. This type of torture went on for years. It would have been an unimaginable disaster if he had lost his job. This was a cruel thing to put anyone through, let alone people who had young families depending upon them. Dad survived many rounds of redundancies until he was eventually caught, luckily when my youngest brother was ready to leave home and Dad could just get away with characterising this as an “early retirement”.  The achievements of unions in the rail industry meant a good payout and superannuation.

Myself and my brothers owed our childhood to the wages and conditions rail unions had fought for and won. I went on to be the leader of Dad’s union, the ASU, and to represent people like my father.

Dad’s time at work was 100% unionised. And despite the viciousness of neo-liberal ideology and the loss of compulsory union membership in the early 1990s, the NSW Railways – whatever the name it has today or will have in the future – is still one of the most highly unionised employers or places to work anywhere in the country.

There are many lessons and perspectives people take on the Great Strike of 1917, but the one I take from it is a story of resilience. Our resilience. The union movement’s resilience.

Too often we can look at history and not allow enough time to gain perspective to measure or assess the meaning of events. This is so often the case with big industrial struggles throughout our trade union history.

Rarely have these big strikes – from the shearers to rail strikes, meat workers, maritime strikes that shaped our history – been immediate victories. In fact, most of the time, they have been crushing defeats. If you considered these strikes in terms of whether the demands workers made at the time were immediately met, or whether the boss or governments immediately capitulated – you would consider them to be failures.

In the case of the 1917 strike, not only were the demands not met, but the government went on to do everything within their power to crush and destroy the unionists involved and their unions.

Yet, out of many of the strikes I mentioned, we won arbitration, job security, short working weeks and living wages. Out of these strikes we won some of the best living conditions for working class people anywhere in the world and grew a union movement that has shaped every single Australian’s living standards. The very demonstration of the power of these strikes and mobilisations often brought with them concessions at a time after the wash-up of the event in an effort by those in power not to have us rise up again.

The victory of the 1917 strike was something more far-reaching. The government of the day, the ruling class and the press they owned tried to destroy us. But despite owning the media that attacked and vilified the unions, despite all the forces available to the state being mobilised against them, despite the blacklisting of the lilywhite strikers, despite the deregistering of so many unions – they did not crush or destroy us. They made us stronger.

The railways are still unionised – the RTBU, ASU, AMWU, ETU and AWU – HERE TO STAY.

They wanted to punish a generation of unionists so severely we would want to forget this strike. Yet 100 years on, we are here today, five generations on, celebrating it.

Why did we get stronger? Scientists say that big environmental events in someone’s life can change their DNA in small ways. Small changes that are passed on have widespread consequences for many generations.

An event capable of changing DNA has to be big and I think the great strike is like such an event on a collective scale. Because on any measure, the strike and the mobilisations that it involved shook the foundations of this city and that shaking was felt right up and down the eastern seaboard and inland as far away as Broken Hill.

There are many estimations of the numbers participating in the strike, and it was big, massive for the time and population of our country. And this city saw the biggest mobilisations it has ever seen. Ever.

Now I live in Melbourne, they like to consider themselves Australia’s number one mobilisers, thinking they have the biggest rallies in the country. But they forget the biggest Vietnam Moratorium marches were here, the biggest reconciliation march was here and what is often thought to be the biggest mobilisation in Australia was here with up to half a million people protesting the Iraq war.

But the great strike of 1917 surpassed all this. 100,000 people regularly on the streets during the month-long strike. Taking the population of Sydney at the time, that would be like over 600,000 Sydneysiders protesting week in week out, in addition to all the mobilisations around the country. Imagine the effect of that. I do not know if there was a larger mobilisation in history before this. It must be up there, and it is certainly the largest per capita mobilisation our country has ever recorded.

Something like that must have shaken the very foundation of our society and this city. It would have had a profound influence on those who participated. The fact that the government moved to deregister the unions and blacklist the strikers actually would have meant its affect was deeper and went for longer. This is the type of event that could change DNA.

Many have spoken about the leaders it produced and the gains we went on to make as a working class. This event punished a generation of people for sticking by their principles. It imposed great cost on them.  So it is not surprising that our union movement talks in a particular way about sticking by your principles, even if that means breaking unjust laws.

Strikes also make you see very clearly there are two sides and you cannot sit on the fence.

Perhaps this is why, generation after generation, there is not a greater insult to throw in the school yard, at work or toward another person than a certain four-letter word – S.C.A.B. Scab.

The reaction, even today, to people crossing picket lines being called scabs is so strong – whether it be the Fairfax strike or in Longford at the moment, where to use this word has such an effect that a court orders that an inflatable rat called “Scabby” be deflated, and on picket lines around the country, courts have outlawed the uttering of the word scab.

The government must have thought, the bosses, the media owners must have thought – we have crushed this democratic uprising. We have taught working people to know their place, to accept managerial prerogative, to abandon their unions. But instead, it made us braver in our convictions, more certain of our principles and more ready to fight against injustice.

The lesson of the 1917 strike is really one for right-wing, union bashing governments. You can sack us. You can outlaw us. You can vilify us every single day with all of your media might. You can set up Royal Commissions. You can tap our phones, you can raid our offices. You can vilify and punish our leaders. You can bring in laws to police us. You can support laws that make our work hard, take away all support for unions to grow and all acknowledgement that we exist.  You can fine us, and jail us. You can do all this. But you will never defeat us. We are not going away. We will never go away. And the harder you fight us, the more you teach us. For you can never crush or destroy a belief – the right of all of us to be treated equally and fairly. And you can never take away our power – the power of unions – the simple act of working people deciding to stick together.

Thank you very much. 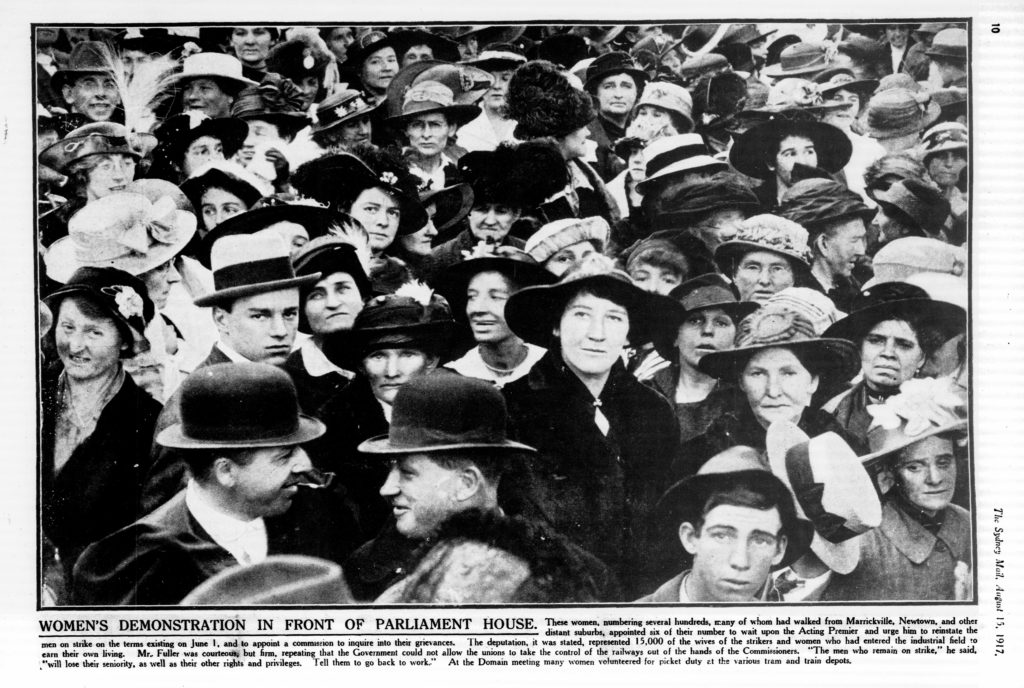 Our cover image is from the Mitchell Library, State Item 726: Tribune negatives including Sydney Wharfies’ Centenary at an unidentified pub. Library of New South Wales and Courtesy SEARCH Foundation.