Please note that due to COVID-19 there are significant postal delays. We are unable to guarantee express post. 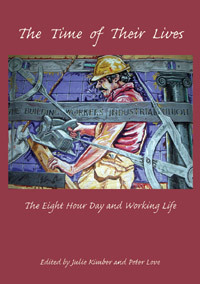 On 21 April 1856 Melbourne building workers won an industry-wide agreement to establish the Eight Hour Day. In the 150 years since then the slogan ‘Eight Hours Labour, Eight Hours Recreation, Eight Hours Rest’ has symbolised workers’ efforts to take control over the time of their lives and, in doing so, strike an equitable balance between work, rest and play. It was an assertion that they were not simply ‘operatives’ in a labour market, but also family members and citizens in what they hoped could become a civilised community. This book offers historical perspectives on that continuing campaign, to give readers a long-term context for our current debates over the work/life balance and power in the workplace. Contributors to The Time of Their Lives include: Margo Beasley, Lyn Beaton, Drew Cottle, Angela Keys and Helen Masterman-Smith, Charles Fahey and John Lack, Patricia Grimshaw, Nell Musgrove and Shurlee Swain, Claire Higgins, Rob Hitchcock, Julie Kimber and Peter Love, Ben Maddison, Val Noone, Bobbie Oliver, Mikael Ottosson and Calle Rosengren, Jeff Rich, Kerry Taylor, and Barbara Webster.

Save this product for later
Display prices in: AUD